The Dosa and its many avatars.

When we travel I make it a point to eat dosas.At one point in time it was a treat because I just couldn't make the perfect dosa batter. Now that hurdle has been crossed and there's dosa batter in the fridge most days of the week.It's the perfect fall back option,its quickly prepared, is satisfying and makes me look like a kitchen diva. 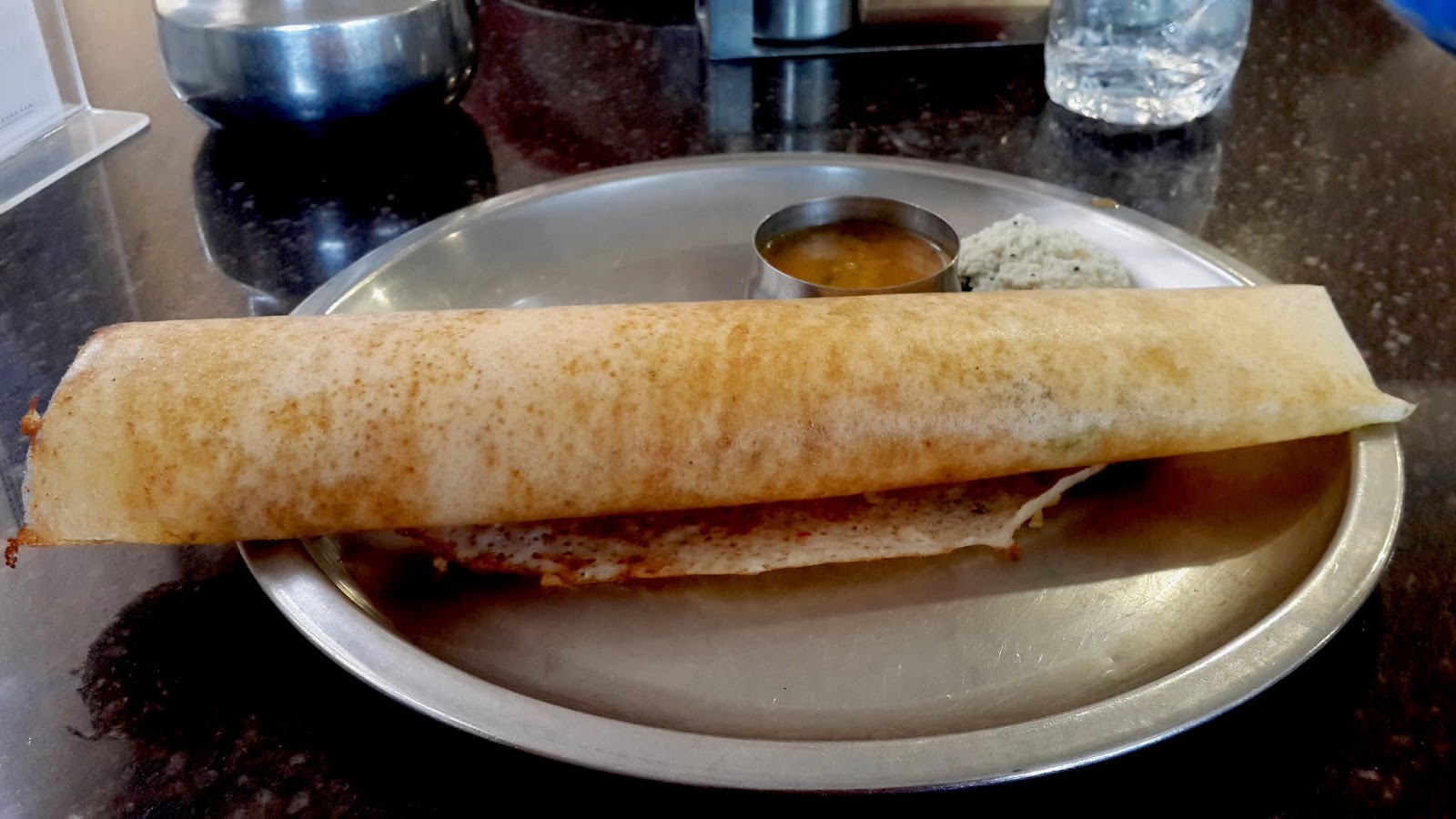 Masala Dosa
The classic Masala Dosa made in Tamil Nadu must be thin and crisp and rolled into a cylinder with a potato filling inside which is the masala. The Masala Dosa is served with sambar and coconut chutney. The Mysore Masala Dosa which is thicker, has a spicy garlic chutney smeared on the inside of the dosa and then the potato filling or masala is put into the folded dosa and a dollop of butter put on the dosa. If you're thinking this is sinful then there's the Davangere Benne Dosa. I sampled it in Davangere thanks to a craft project I was involved in, in the area. Dripping homemade butter, its to die for. 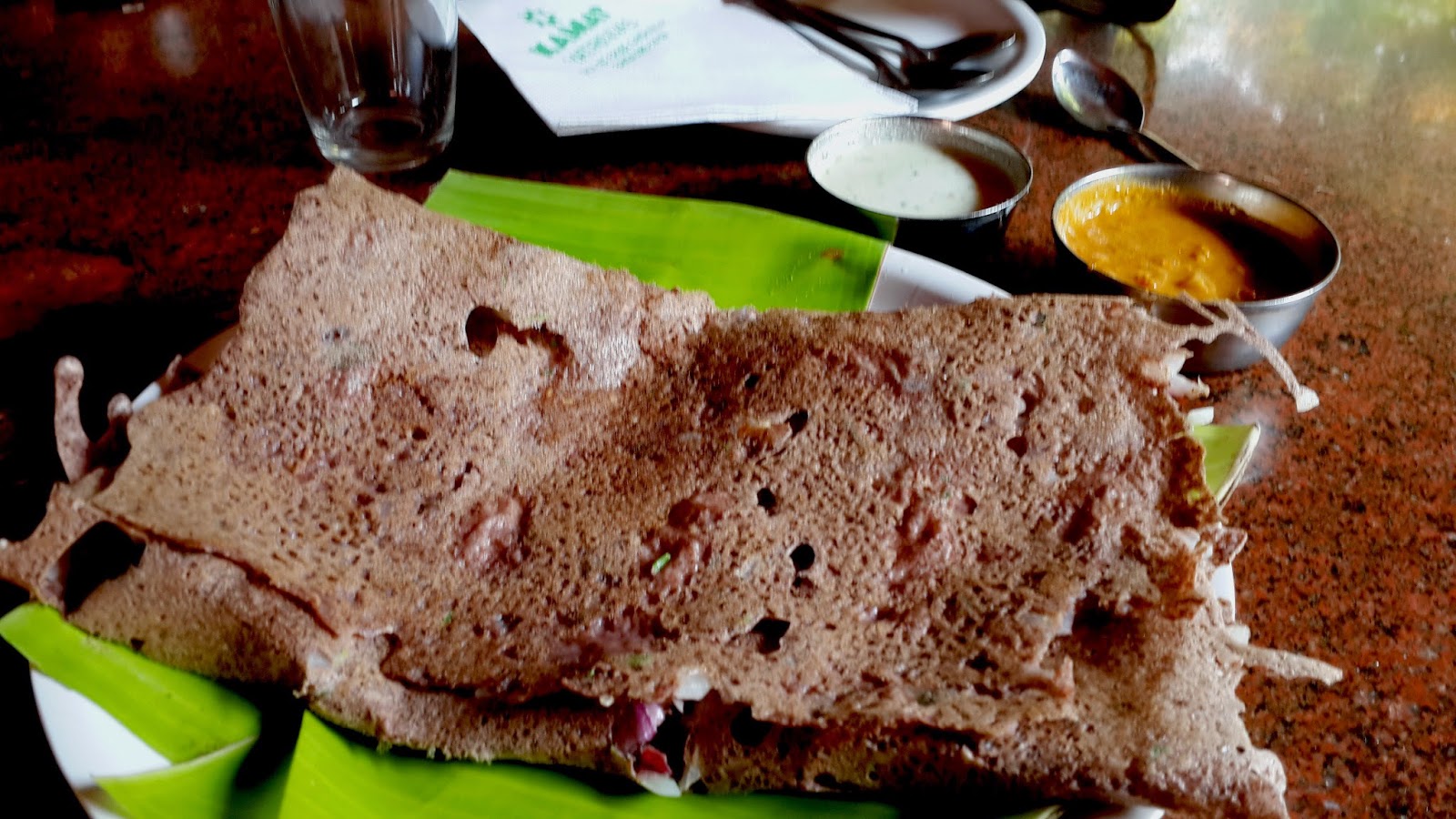 Ragi dosa.
I first ate a Ragi dosa with vegetable korma when I was on a craft project in Tirunelvelli back in the 90's. Memories of choking down Ragi porridge aptly named mud porridge for breakfast, when in boarding school, stopped me from ordering the ragi dosa. Everything on the menu had been ordered at least twice during my fifteen day project. I finally ordered the ragi dosa and korma becuase the waiter sold it to me. I really enjoyed it.
My altered opinion of Ragi had me looking for ragi dosas on menus but I didn't find it until a recent visit to Kamat Lokaruchi on the Bangalore - Mysore highway. It was more a Ragi onion dosa served with a mxed vegetable curry and coconut chutney. I probably found it in Karnataka because Ragi or finger millet is an important part of the local diet.
Ragi dosas are now a part of my repertoire, first for the sake of nutrition and health. Ragi or Finger Millet  is a rich source of Calcium, Iron, Protien and Fiber and secondly I'm trying to find simple recipes which use lesser know ingredients or ones which are ignored and on the verge of being forgotten altogether. 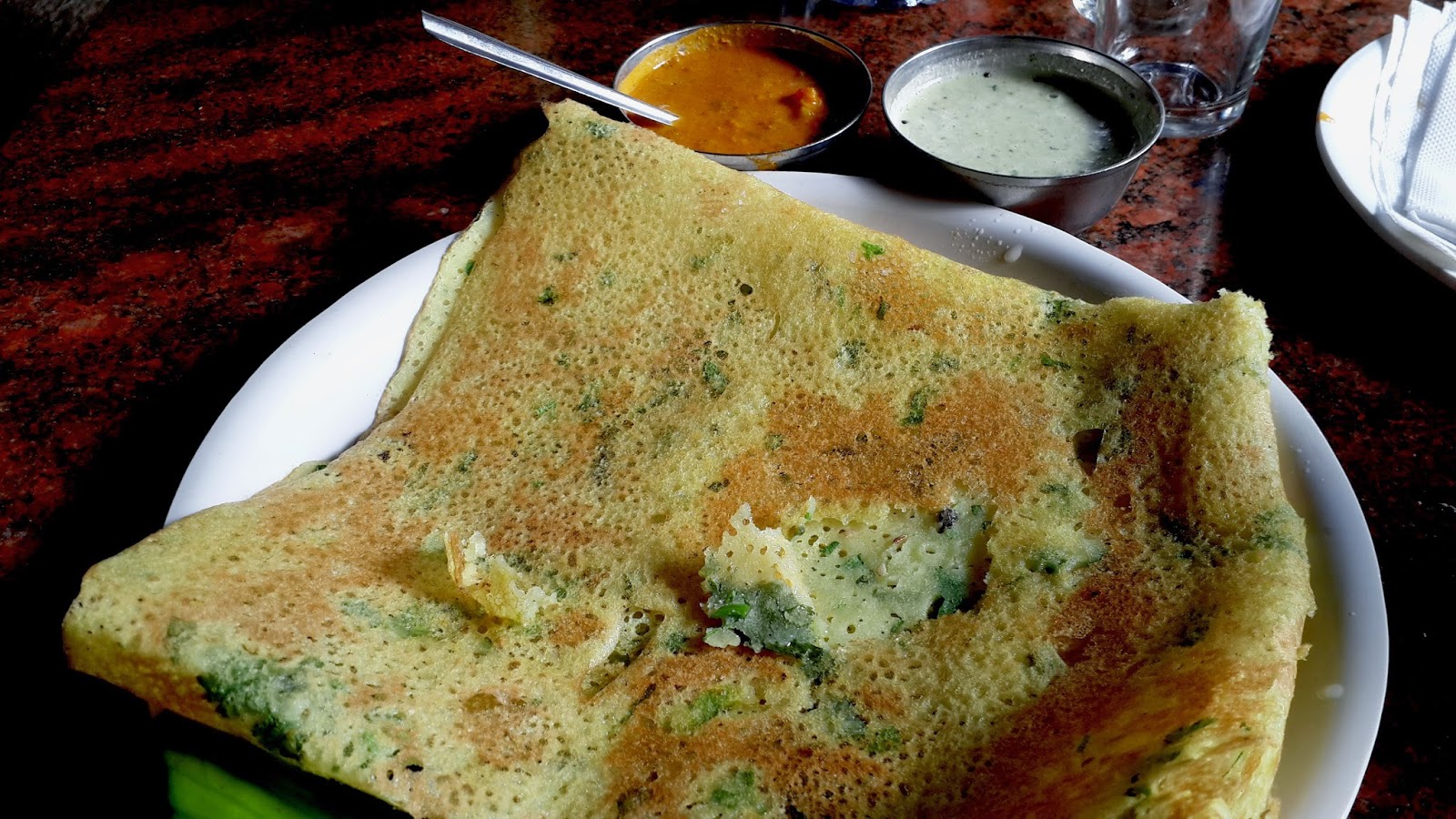 Rava dosa.
The Rava dosa is one that requires no time for fermentation of the batter. Its a batter made of readily available ingredients - rava (fine semolina), rice flour, plain flour (maida), jeera ( cumin), curry leaves,chopped green chilly, chopped onion and coriander leaves for flavour.Mix all the ingredients with water and your batter is ready.
The Rava dosa is one that's on most restaurant menus along with the Onion rava dosa. 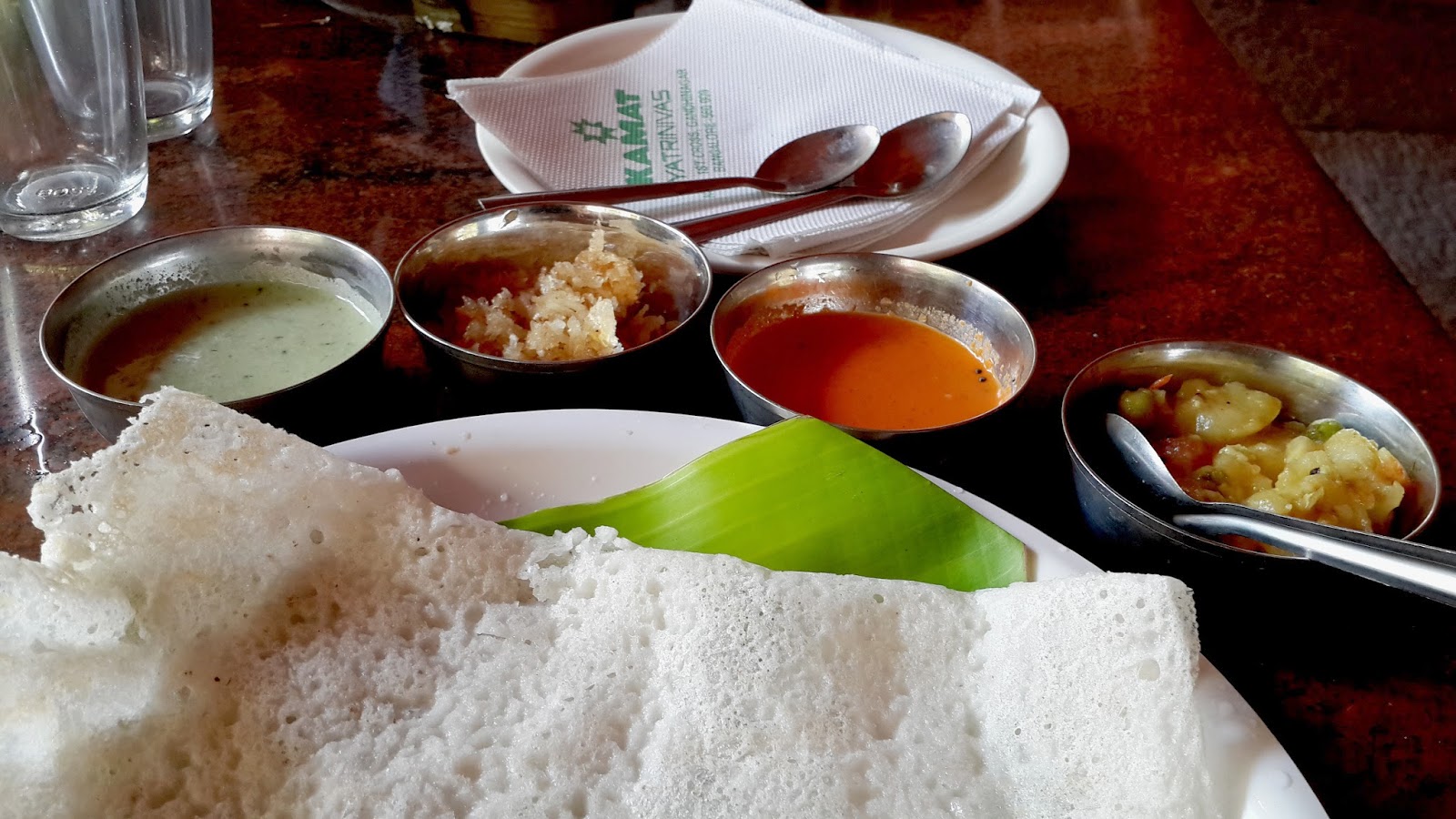 Neer Dosa.
Neer means water in Kannada and the batter for the dosa is very watery hence the name. Least oily of all dosas. The batter too doesn't require fermentation. At Kamat Lokaruchi, Neer Dosa is served with grated coconut mixed with jaggery, coconut chutney and a mixed vegetable curry.
The texture of the Neer Dosa makes it perfect for sopping up prawn or fish curry.
I need to start making Neer dosas. I discovered the Neer Dosa only after coming to live in Bangalore and eating at restaurants serving Manglorean cuisine. 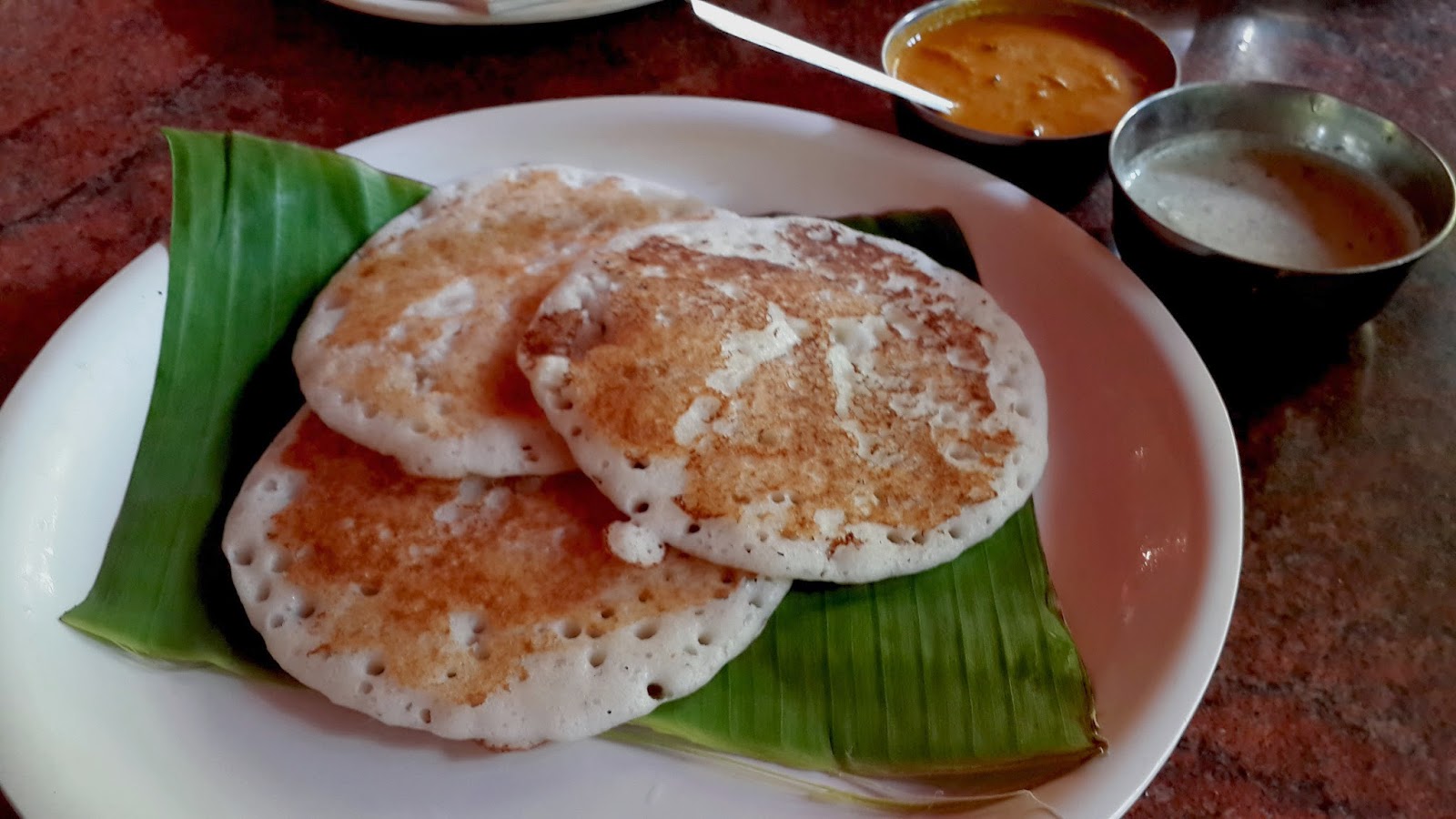 Set Dosa.
Set Dosas come in sets of three small fluffy pancake type dosas served with coconut chutney and vegetable saagu or curry.
The story goes that restaurants sold four dosas per plate but customers found it difficult to finish four dosas so they started ordering 'half set' at half the price. Eventually the restaurateurs made it a set of three dosas and that's come to stay. The Set Dosa is again popular right across Karnataka.

If the Dosa has many avatars its because the taste appeals to almost everybody, its umami if you ask me. In texture it can be crisp and crumbly or soft and spongy and compliments the taste and textures of the chutney, sambar or saagu it's served with.
The Keema Dosa at the college canteen was a treat remembered with nostalgia each time I order it at a restaurant specialising in Kongunadu cuisine.
If you're seeking attention order the Family Roast and watch when people turn to gaze open mouthed as a waiter carefully carries a four foot long dosa over to your table. It will feed the family, its so large. The 'Muttai Dosa' or egg dosa bridges the vegetarian, non-vegetarian divide.
The lesser known Kambu Dosa made from Pearl Millet or bajra are made at home and the restaurants which serve them are few and far between. I need to start making them.
Dosas are perfect street food.There's a dosa cart that sets up shop on the street each evening at 6th Block, Koramangala, Bangalore and offers 99 varieties of dosas.
When a friend wrote about a new restaurant in the neighbourhood which served an excellent variety of dosas on Facebook, another person asked if  the Szechuan dosa  was available. I was intrigued. I had never heard of it but a quick google search and I found any number, here's a Mumbai roadside one by Tarla Dalal which has instructions to make a Jain Szechuan Chopsuey Dosa as well as a Paneer Szechuan Dosa.
If memory serves me right Woody's in Ahmedabad had a North South Dosa on their menu.
Geography, culture, locally available ingredients, seasonal ingredients, creative chefs and memories have fashioned the many avatars of the Dosa.

Do you make Dosas? Do you have a list of dosa joints which simply rock? and like Quick Gun Murugan  who orders a whiskey with his masala dosa what would you pair your order of dosa with?

If you shop on line I would appreciate it if you would click on the Amazon link here or the Flipkart link here to browse and make your purchases.
As an affiliate, Flipkart and Amazon will pay me a small percentage of the total amount you spend.You will not be paying anything extra. Thank you.
Posted by Maya Sara Matthew at 05:06

Goodness gracious, I had no idea there were so many different dossas.

This is just the tip of the dosa Jack. I'm sure there are hundreds of variations. Need to travel more extensively in South India and eat more dosas.The south Indian diaspora should throw up some interesting avatars.

Deliciousness! Cannot have enough of dosas! Very tempted after reading this! Haven't yet tried the Kambu dosai or the Schezuan one. And the accompanying beverage for me would definitely be the filter kaapi! (Ideally without the chicory, but will settle for that too!) :D

I agree filter kaapi is perfect with dosa Ila,especially if its dosas for breakfast or afternoon tiffin., but the whiskey and masala dosa combo must be explored. I'm trying out the kambu dosa recipe today. I had some pearl millet from Timbuktu and I didn't have a recipe for it until I discovered the kambu dosa.